Last year apple radically changed the look of Apple's their mobile operating system with iOS 7. John Ive who has been the lead designer behind many of Apple's designs. Lets take a look at some of the changes.

You can expect a number of changes with Apple's latest addition of OS X.

One major change you will see is the dock. 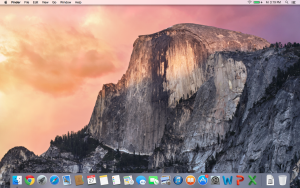 The new dock has improved the design of the icons. the new dock, as well as other UI improvements lessens the UI fragmentation between Apple's Operating Systems.

If you would like to read more about the upcoming changes Apple's gives insight about there design philosophy.

An Insanelymac user Dcai777 has uploaded some great screen shots of the operating system. You can view them here.

What are your thoughts about the up coming changes coming to mac this fall? Let us know in the comments below.